Recording location: The Churn version 7 with Paul in Pittsburg.

Matt introduces Paul as being in Pittsburg for the first time. They talk about their technology setup and that they are recording their files separately.

Ryer gets on the mike to talk about his exploded coke.

Matt talks about taking his kids to a Las Vegas Aviators minor league baseball game. Matt quizzes the other hosts on etiquette around the national anthem because he got stuck at the metal detectors during the anthem.

The hosts recall Don Imus and wonder about their ability to gather younger listeners.

The hosts talk about holding babies. 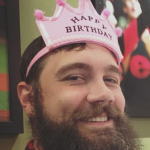